The day starts nice and early because we have two dogs leaving for their forever home, so I already know it’s going to be busy!

We started this association in 2010 because prior to that the government and businesses “controlled” dog and cat populations with strychnine. After my own dog became a victim of this practice my eyes were opened and with some friends we decided to campaign against the practice and substitute it with a Trap, Neuter, Return programme. Since that time, in conjunction with Tieraertzepool, a German veterinary association who specialise in this kind of work, around 5,000 animals on this tiny, 30km long island have been neutered.

We did not intend to operate a shelter but inevitably it happened! The government decided to start rounding dogs up and placing them in a kennel in very bad conditions, our response was to remove the most vulnerable, the elderly, the puppies, the sick and take them to our new Rehoming Centre.

A place that was intended to be temporary and only house 25 dogs, we now have 60! We also did not intend to promote international adoptions, hoping instead to solve the problems of Sal on Sal. However, the adoption rate is very low and only the youngest puppies are popular, so inevitably we had to look overseas.

As Cabo Verde is considered a third country a complicated process of rabies vaccinations and blood titre tests is needed, taking a minimum of four months and quite a lot of money. All this even though we are a rabies free country!

The dogs will go to the airport at midday so they have to be prepared to travel, we have to make sure their travel documents are perfect and then comes the waiting….. two adopters and the entire OSPA team will be anxious until the dogs have landed, and gone through the veterinary check at the airport and are safely tucked up in bed with their new families.

60% of our dogs are ready to travel thanks to our amazing supporters’ group (Cabo Verde Beach Dogs and Hotel Cats) who fundraise constantly to make this happen. It’s an amazing step in the right direction.

In the meantime, daily work begins at 9am with the feeding and exercising of 60 dogs and puppies. Fortunately it’s a Thursday and that means we will have our two regular volunteers to help. In the afternoon, if we are lucky, we may have some visitors who will walk more dogs – many tourists fall in love with the Sal dogs, who are, without exception, very laid back and friendly. So easygoing, they adjust to all kinds of situations, from the snow in Sweden or life on a farm and of course, rainy Britain!

Just as we are preparing to leave we receive a call from a distressed tourist – there is a cat with an injured paw at a hotel in Santa Maria – we mostly receive very little detail or information when we receive calls like this, but we can never take a chance, so someone will have to go right away.

Sometimes the information is simply “I saw a dog in Santa Maria, it was thin and didn’t look very well. It was a brown colour”! Well we will do our best!! Unfortunately in many cases, the dog or cat has gone before we arrive, so they have to go on our “look for” list. It’s just one of the challenges of working with a free roaming population.

At least now, though, after so many years of work, in almost all cases someone, a resident or tourist will call us if there is a cat or dog, or sometimes goat or donkey who is sick or injured. A far cry from the situation a few years ago.

Up to the airport, dogs handed over to their flight buddies and loaded on the plane and back down to the OSPA centre where we find a big commotion over a plastic bag that has been left outside.

The team have opened it and found five puppies and four kittens inside! Even with all the neutering, we still have to deal with unintended litter but fortunately this kind of cruel abandonment is not common. The puppies are only a few days old, their eyes not even open, so keeping them alive is going to be tricky.

They cannot stay at the centre because of the risk of viral infections, so we start searching for a foster carer who has the space and time to bottle feed them around the clock. The kittens, a bit older will have a better chance and can be re-homed almost immediately.

Crisis dealt with for now, we move on to the next task for the day – the once monthly parasite treatment for all the dogs. 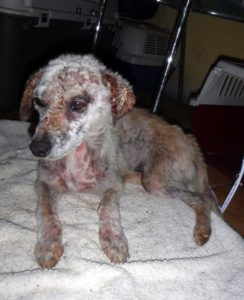 Louis when OSPA found him May 2018 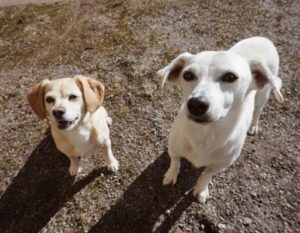 Louis in his new home in Sweden April 2019

Ticks are a huge problem on Sal and they carry *ehrlichia – deadly if not treated. Mange is also very common and causes people to shun the dogs and stop feeding them – it’s so important to be able to treat them – and the transformations are absolutely incredible! We rely heavily on visitors to bring us the expensive medicines that cannot be bought on the island.

Leaving the team for now, the rest of my day will spent on administrative tasks and hopefully some time to do my own work, but sometimes I know the entire day needs to be devoted to OSPA. Top of the list is answering the many messages and emails that we receive each day. A lot of these are requests for adoptions which unfortunately we usually have to say no to.

Adopting a dog from the beach or street requires the dog to be in one place for four months and as we have no space it’s not possible, foster homes can sometimes be found, but are rare. In addition the majority of dogs already have guardians – it’s a hard concept to explain to European tourists who think the lack of microchip or collar means that they are “strays”!

Fundraising and finding adopters are the next most important jobs – we are constantly seeking new ways to reach people and social media is a great tool for that.

A few years ago OSPA was in a precarious financial state, just about scraping by from month to month. Now though, thanks to a sponsorship scheme and our enthusiastic supporters, we have a steady income which can help us to improve the future for the animals in our care.

Recently we were able to start building a new isolation unit so next time we will be able to take those young puppies and thanks to the donations of parasite medication we can run a weekly mobile clinic – visiting the outside villages where we know that the animals will probably never see a vet in their lives (except, hopefully to be neutered!)

There is still a lot to do though; we need to be able to effect a big change in the mindset of the government and businesses to implement a humane and effective dog and cat population management programme.

We need to demonstrate to guardians that animals need a minimum of food, water, shade, parasite treatment and help if they are sick or injured – and that if they can’t afford it, we can help. We need to recruit a permanent veterinarian to be able to offer more immediate treatment instead of relying on visiting vets.

We need to show tourists that their kindness in feeding animals at the restaurants and hotels endangers them and risks them being removed and incarcerated in the municipal kennel. And last, but not least, we need to keep on neutering – nothing is more important to us and nothing will reduce the suffering more than this!

All pictures by OSPA

Receive our latest news, hear how your support is helping and find out ways to get involved.